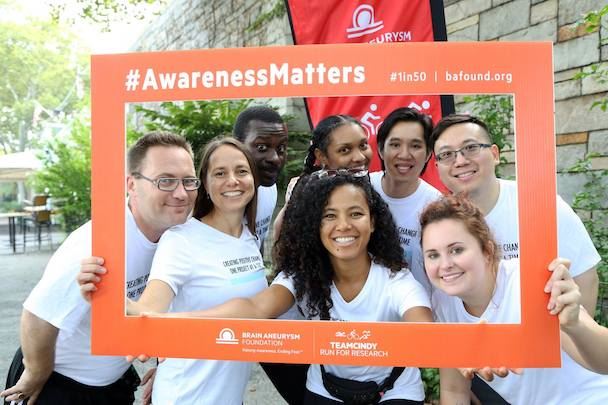 On the morning of April 23, 2007, Cynthia Lynn Sherwin left her Lower East Side apartment for what would be a characteristically busy day. Her typical day started with an early morning cycle ride, a packed schedule of clients throughout the day, and perhaps a run in Central Park late in the afternoon. An experienced marathon and triathlon competitor — who ran the New York Marathon five times and competed in numerous triathlons — Cindy was training for her first Ironman. But this wasn’t to be a typical day for Cindy. Midway through her morning training ride on Riverside Drive, Cindy Sherwin suffered a ruptured brain aneurysm and died suddenly at the young age of 33.

TeamCindy™ was founded in 2008 by Cindy’s Mom, Elaine Schaller, and a group of athletes. Their mission was simple: raise money for brain aneurysm research.

Today TeamCindy™  is a successful fundraising arm of the Brain Aneurysm Foundation (BAF), the nation’s premier nonprofit organization solely dedicated to providing critical awareness, education, support, and research funding to reduce the incidence of brain aneurysms. The events held by TeamCindy™ have raised more than half a million dollars and finance two annual research grants in keeping with the BAF mission: The Cynthia Lynn Sherwin Chair of Research Grant and the TeamCindy – Escape from Alcatraz Chair of Research Grant.

Awareness and research are critical to save and improve lives impacted by this silent killer:

Partnered With Purpose is a proud supporter of TeamCindy™ and the Brain Aneurysm Foundation. To donate to the 2019 campaign, visit the TeamPWP Run for Research homepage.

Contact us to learn more about how your organization can support brain aneurysm research.